Who’s too cool for schooled?

Hey guys! Welcome back! We’ve got eight sim days until the next heir vote! And I’m aiming to make this the last chapter. 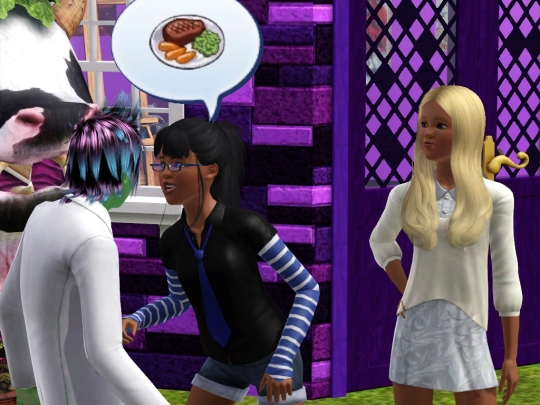 Chelsea: SO PROUD OF YOUR MUSTACHE. I’ll eat it for DINNER! 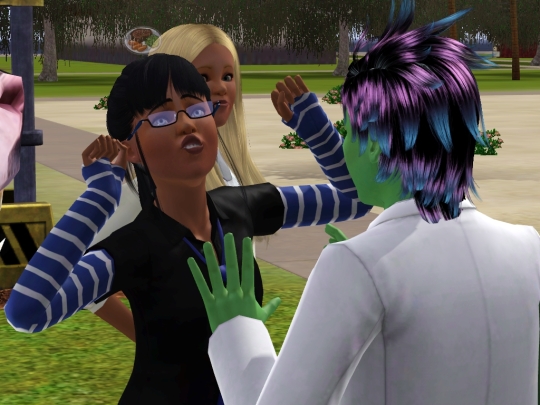 Chelsea: But first I’ll stretch it out LIKE THIS to have enough food for the whole family! And god knows theres a whole ton of mouths to feed

Carly: YEAH. We gonna stretch it yo!

Chance: BUT ILL GIVE YE PERSON PERSON PLUS FOR YOURS EFFORTS. Because I is a merciful mustache wearer

Chance was setting up a prank.

And that’s how Chance became the first ever child in my game save to be punished for pranking.

OKAY. IM SORRY. IM REALLY SORRY. But this pic made me think of this.

I don’t even know.

They just looked like some kinda trio for a second there. United in their hate for Bunny. 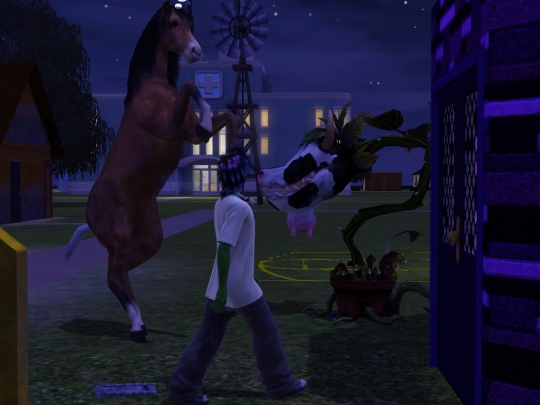 Horse: BOY. Us three forever. We will go far in life. CHARGE

That horse likes the idea of a trio.

Coco: *is on guard duty* 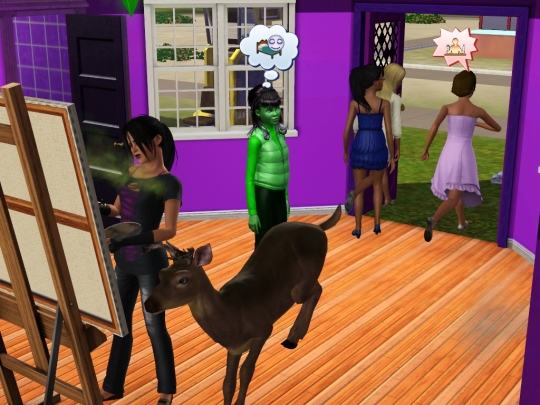 Crystal: DEER! RUN FOR YOUR LIFE

Chelsea: That’s a bit of an overreaction.

Catarina: I’m tired of all this brouhaha, I’ll be happy if I’m not heir.

Deer: This hard wood floor just makes da best sound when I gallop across it.

STOP MAKING IT LOOK LIKE BADASS TRIOS. First Chance and now you Charlie?

I don’t know how to feel about this painting so I stuck it in the boys/catarina’s room.

Because I love them?

Because Darlène just can’t get enough of us.

Darlène: Remember that conversation we had…well I’m still waiting for you Chance, even if you have a mustache.

Because she’s such a dedicated fan, I gave her a makeover. increase cool gene propagation hell yeah 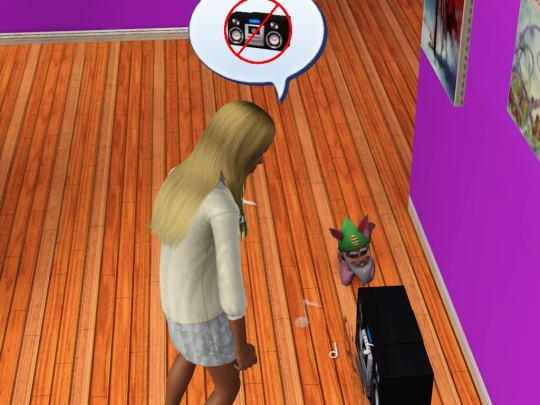 I missed her actually passing out, but she’s shutting off my damn radio so there’s no doubt it happened. 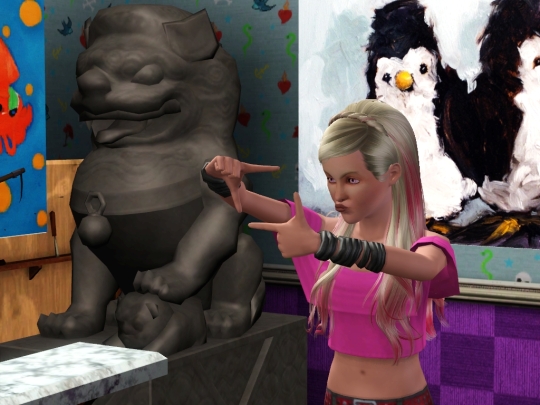 How did I miss the production of this in my own home!?

I’ve never had a guest do this for me before…I NEED YOU DARLÈNE. 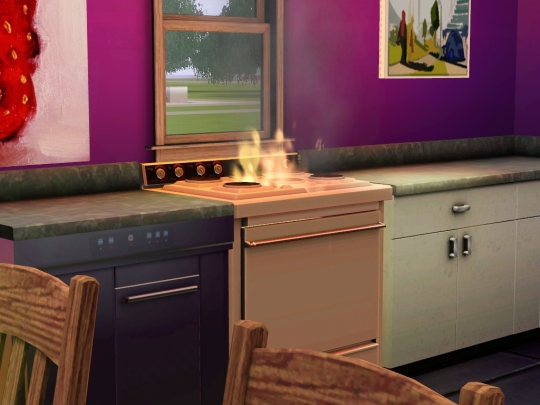 I should keep count of how many fires have erupted. 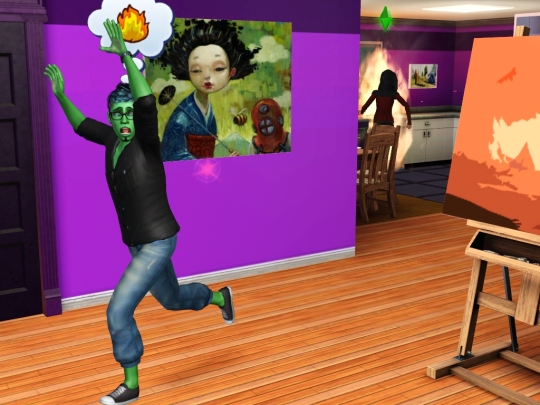 Finally, Rham is acting like he should be XD

Well the kids aren’t around so I guess he doesn’t feel the need to be a hero. 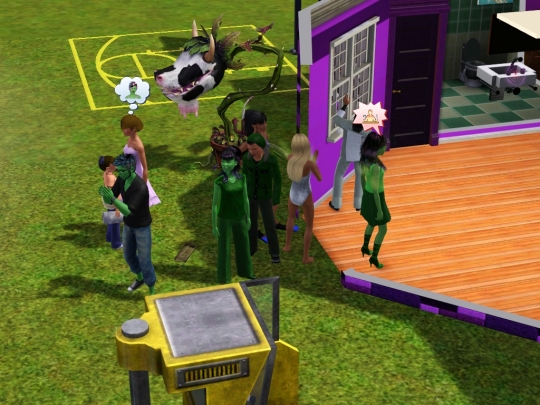 All of them decided to leave school to come running home because OMG FIRE.

And then Rhamnus went and played the guitar. He’s the first one ;-;

Brittney: *wishes to flirt with someone else*

Brittney: I need to remind him he’s mine in case he decides to go off and be a musician 😡 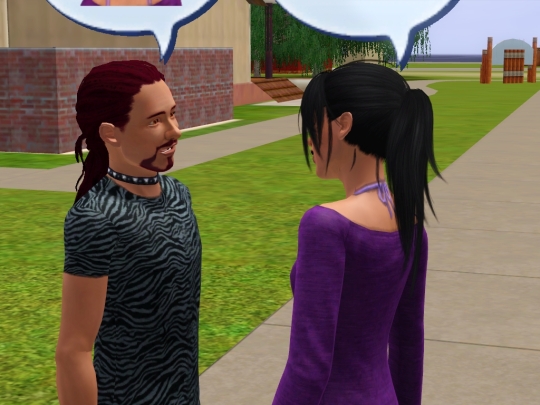 Boo was the first sim to walk by. And then Britt wished to flirt with him specifically so I painfully let her flirt.

Boo: Haha, this is weird because I only remember you as being the most annoying of brats 😀 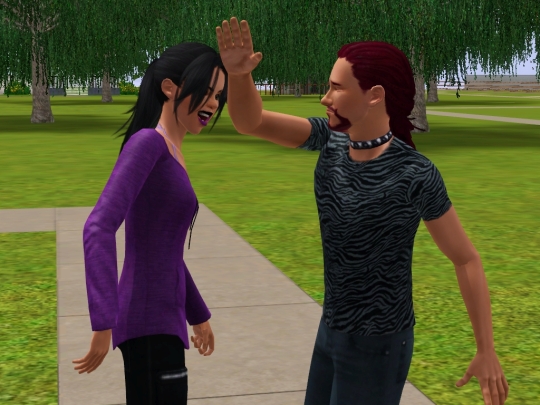 Brittney: Hell naw! You expected me to actually give you a high five after that comment? PLZ

Boo: But I thought we had the beginning of something here 😥 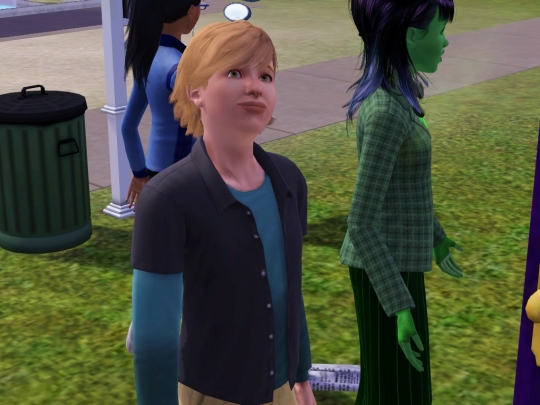 Hmmm, he’s a common visitor as well. I guess I could do him a favor and enhance his genes.

I’m having too much fun.

Didier: I might have a chance with Crystal now 😀 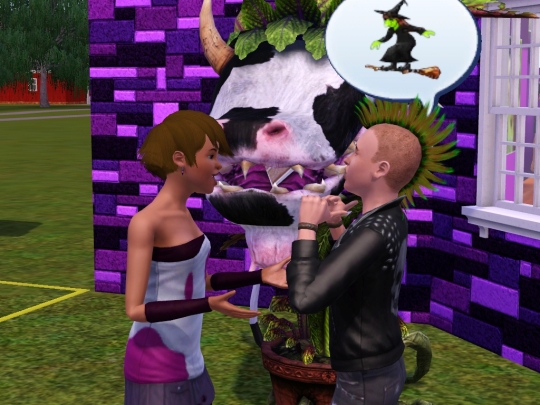 Crystal: Am I supposed to congratulate you? Cause that ain’t going to happen. If you want to impress me you’re going to have to come over here and fly on your broom.

Then they hit it off with them hearts and bonded for an hour or two. I love it when this happens.

Ugh I can’t really complain about them making food anymore. We’re out of leftover cake.

Since she was nice enough to make me a sculptur worth 47$ I’ve decided to keep tabs on Darlène.

AND WHAT ARE YOU DOING DARLÈNE. You must stay single forever! T^T

Rham gave me puppy eyes and begged for a job.

Rham: Britt said when all the kids were old enough I could get a job ;-;

So I broke and used his one action to get him a part time job as a grocer. Maybe we’ll get some discounts XD 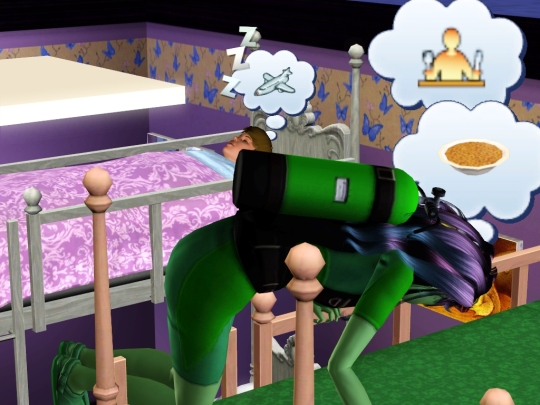 I’d like to know how Crystal magically just, LIKE RIGHT NOW, leveled up to level 5 in the logic skill.

Crystal: LEVELING up in my SLEEP like a BOSS. With aerodynamics.

Are you excited Charlie? 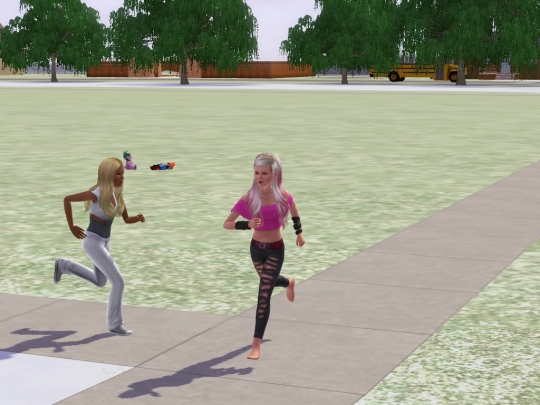 I like how neither is running in the right direction. 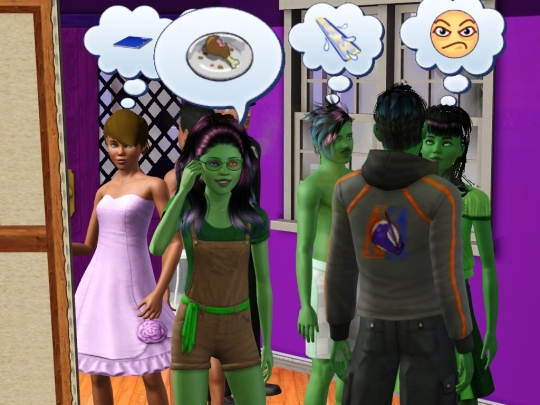 Calliope : Hi Didier? How’s it going here you ask? Have you ever heard of the hunger games?

It’s the daily crowd-the-doorway-because-school-is-over routine. With of course Rham doing some grounding, because damn those kids! Won’t they learn to go to school already? 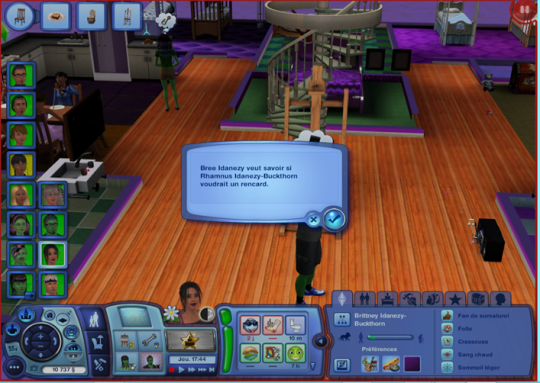 BREE. YOU GOTTA STOP THIS BREE. 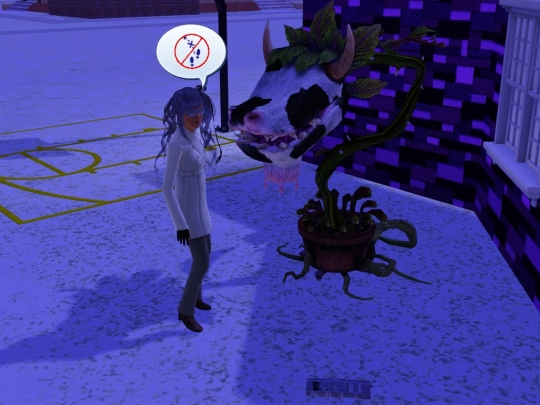 NO NO NO I REFUSE

AMESTIA WHY? My first death ;-;

Amestia: Thanks for nothing you useless grandson. I would’ve died on my own.

Chance: Grandma. Just cause I has a gun does not mean I shot you. Geez.

We have a little bit of traffic here >_>

Chance: Do nots worry grandma! I see ye off!

Amestia: As long as you don’t shoot me again.

Cameron, Charlie, Crystal and Chelsea decided they were too cool to come and see what’s going on.

DamienReaper: Hey guys! Been waiting for someone to die so I can come and say hi. You sure took your time! *stabs her*

Amestia: …Alright alright I get it. I’ve been alive for a little too long.

Reaper: There! I gave you a nice tombstone! More than a cowplant deserves! 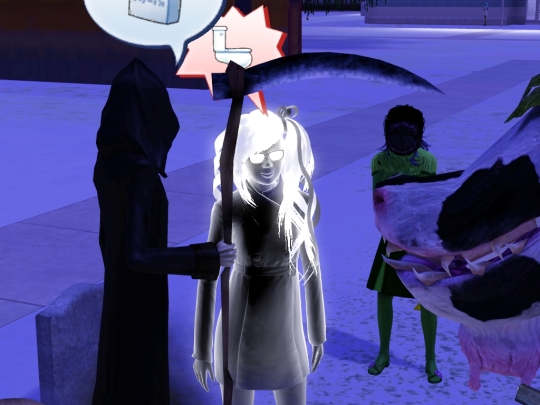 Amestia: WAIT. I need to pee.

Wow she didn’t even get a proper handshake. Reaper just kicked her in the tombstone.

This is a great way to start them funerals. 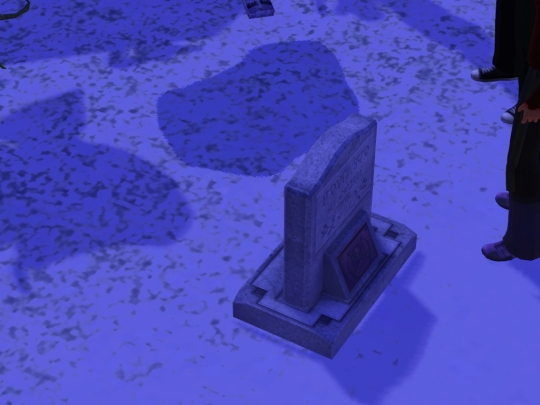 I HATE YOU SO MUCH RIGHT NOW. 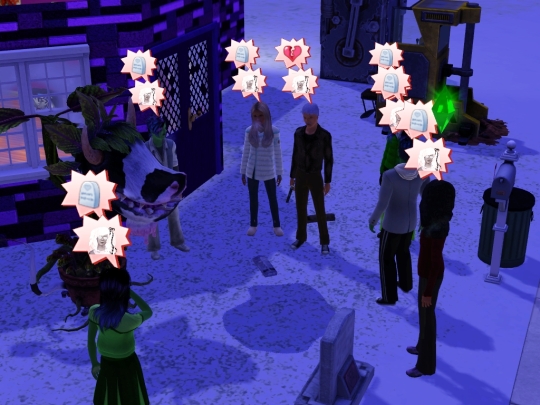 This is just fantastic. The next few days are going to be an absolute blast. 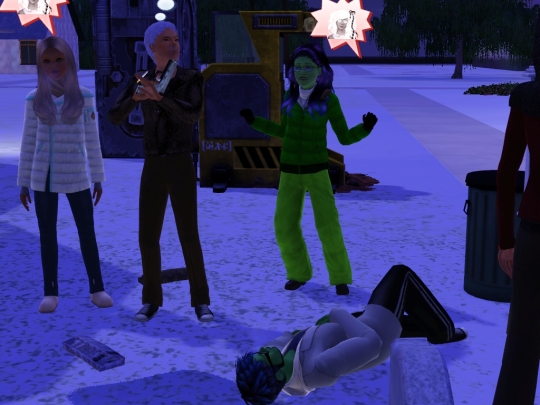 People are taking this well. Rham fainted, Calliope is having a panic attack, Bunny is trying to blow his head off and Carly is still not sure what just happened. 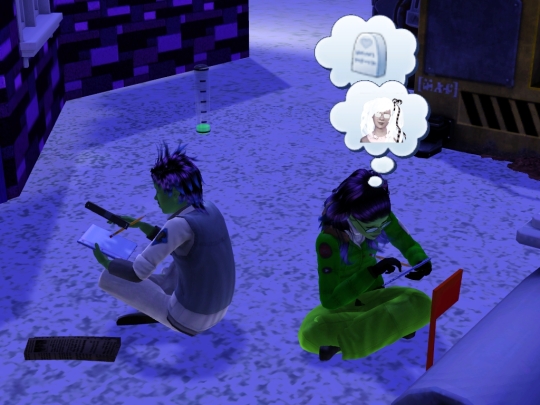 Calliope: Seeing grandma die made me realize we need to focus on our future!

Chance: Especially since grandma got demoted before dying. Do not wants to be like her.

You are remembered fondly Amestia. 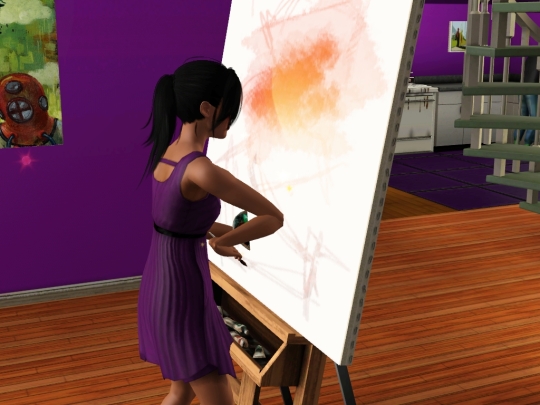 Charlie: I just realized if I become heir I’m going to DIE. I don’t want to die ;-;

Chelsea: Yeah, I’ll be heir for you.

Cameron: Or I will.

Charlie: I’m so lucky to have such caring siblings :’)

Calliope went and hung out at James’ place! I’m so proud :’)

Also, the ponytail guy, Lounes, had a kid with Véra. Which means James is a grandpa which ALSO means if Darlène is added in the family we’ll technically be distantly related to JAMES.

Since you know…Darlène and Véra are sisters…

Really? But we’re so close to the end Callie! SO CLOSE

Calliope: My eye couldn’t keep it in any longer!

Amestia: Haha I thought routing would be easier BUT CHAIR IN DA WAY

Chelsea: I KNOW. Why can’t she like just stay dead??

And then Amestia proceeded to scare the crap out of Chels. 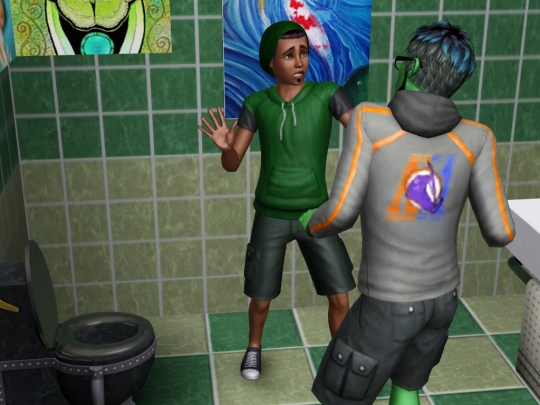 Rham: DID YOU JUST TRY TO PRANK THE TOILET RIGHT IN FRONT OF ME?

Cameron: What? Dad! I’m the best kid in here! Why would I ever do that!?

My sims are getting dumber. 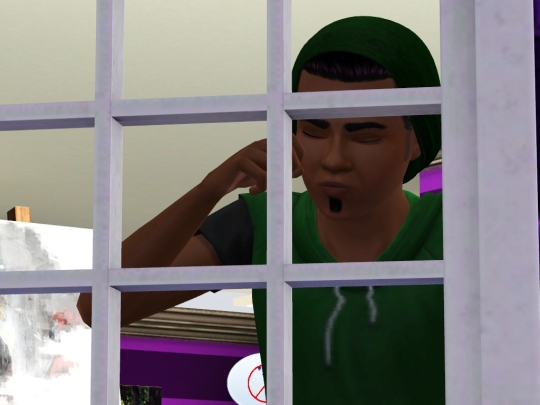 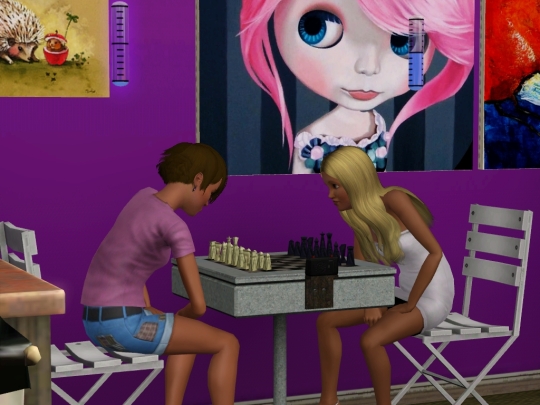 Heir vote must be just around the corner.

Carly: Uh Crystal, are you trying to steal my thunder here?

At least he was smart enough to wait for Britt to leave this time. 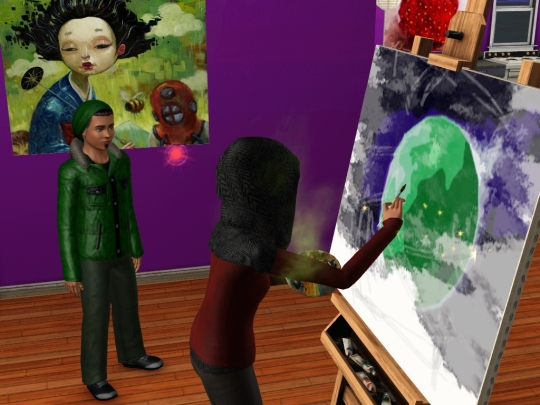 Cameron: Hey ma, ma, my prank was a success 🙂 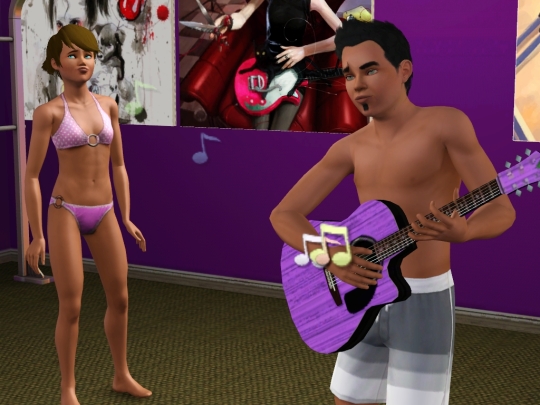 Charlie: Apart from my amazing guitar skills, I also have been practicing my eyebrow raising skills readers! 😉

Cameron: I think it’s really cool that you’re a vegetarian and stuff, saving the animals and all. Go green!

Charlie: Hmph you think I don’t know what you’re doing? It’s heir wars brother! You won’t defeat me with compliments 😡

Shut up. It was fine and then you made the camera move Britt. ITS ALL YOUR FAULT.

We are 45m from finishing this chapter and what does Cat do???

Catarina: I need to leave my mark before the heir gets chosen. 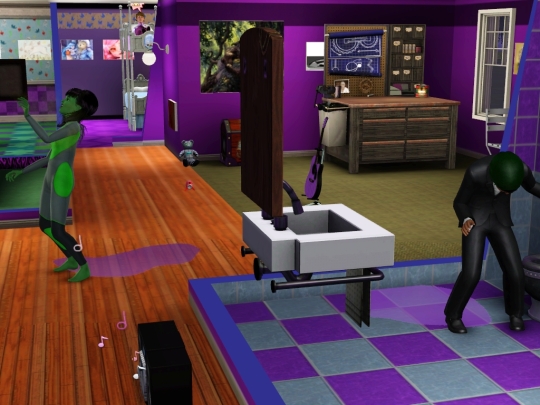 Today is Charlie and Cameron’s birthday!

Which means this chapter is done! Next up heir vote. I recommend you choose wisely. VERY WISELY.

Randomizing every LTW choice and trait (apart from the obligational insane trait) for a whole generation of children: 1 x +10 = +10

We even finish off with a nice round number!

(Completed) He's about to embark on a life changing AU...

On Pancakes and Madmen

Echoes of the Past
Mpart's Malapropisms

The Stories and Legacies Index

A virtual library for all Sims Stories and Let's Plays

For all intents and purposes, Isabelle should already be dead. And yet, here she is.

The Fey of Life

Fairy tales in life are few and far between

Oh, it's gonna be good

You Never Know What May Be Lurking

Faction of the Lost Ones